A little disc landed on my doorstep this morning and what a joy it is. A proverbial gem. I must confess I’d never heard of Tino Contreras but my ears have been truely opened after spending the last couple of hours with his vast and varied musical legacy. Relatively unknown outside his country of birth, he is probably Mexico's best kept musical secret. With a career spanning over sixty years, "El Jazz Mexicano De Tino Contreras" covers a wide variety of stylistic ground and consistently defies musical expectation. Fiery percussive salvos and modal jazz grooves are unexpectedly fused with mariachi rhythmic inflections, ancient pre-hispanic instrumentation, sinuous eastern scales and a myriad of oddly intriguing  cultural twists.
In particular, “En El Viejo Estambul” is a wonderfully evocative psychedelic jazz composition, which combines strange middle eastern twilight zone scales, motorik jazz drumming and shimmering vibraphonic glissandos. The effect is beautifully exotic, propulsive and hypnotic. Things get a little odder with tracks selected from the 1966 long player “Misa En Jazz”. Like many jazz musicians and composers from the period, Tino Contreras attempted to combine secular and non secular composition. The results on display here are eerily engaging. “Santo” interweaves a stripped down jazz organ refrain in 5/4 time (think Dave Brubeck Quartet) with liturgical male and female vocal chant - it shouldn’t work but it does. Weirder still, “Credo” utilises a ghostly ballroom organ which evokes an image of Sun Ra languorously jamming on a disused seaside pier round midnight with a devout choir lamenting to otherworldly effect in the background. Twisted jazz never sounded so good. “Gloria” is even odder, opening with noir call girl tease, the track slowly evolves into celestial chorus and progressive modern jazz flourishes creating a sublime meeting point between the sacred and profane. I don’t go to church often but if I heard this playing from the pulpit, I definitely would.
Throughout his career,Tino Contreras, was a visionary innovator, he travelled to Egypt, Turkey, Haiti, Brazil and Argentina collecting a wealth of musical knowledge along the way. In his later years, he developed compositions using the microtonal system of musical composition, ‘Sonido 13’, the ‘Thirteenth Sound', which divided conventional scales into a vastly wider palette of sonic tones.The track “Orbita” is a fine example of this style of composition. Taken from the rare and virtually untraceable private press record “Quinto Sol, Musica Infinita” this track required specially modified instruments to be built in order to create the wonderfully strange percussive effects which feature in this lopsided waltz time number. Shards of prepared piano collide with a deep jazz groove while sonorous baritone sax overtones dissolve into kinetic percussive joy, an intoxicating blend indeed.
This release documents the career of a unique and singular talent and should be investigated at the earliest opportunity. A remarkable out there release.
‘El Jazz Mexicano De Tino Contreras” is released by Jazzman Records on the 7th November. 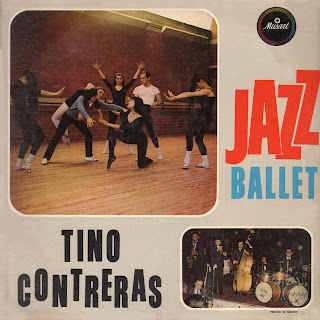 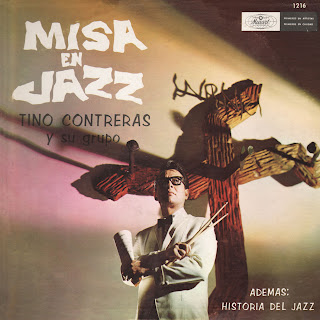 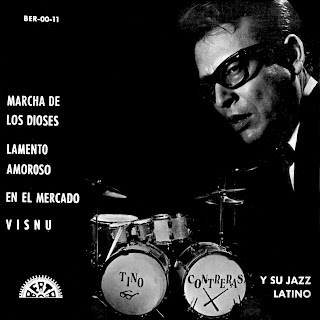 Posted by A Sound Awareness at 6:30 AM