Hippolyte Bayard is a little known figure, marginalised by history. Bayard was responsible for the invention of photographic direct positive printing, a process which preceded that of Louis Daguerre. His process involved exposing silver chloride paper to a light source which turned the paper black. The paper was soaked in potassium iodide before being exposed in a camera. After the exposure, it was washed in a bath of hyposulfite of soda and dried. Francois Arago, a sponsor and friend of Louis Daguerre and president of the Academie des Sciences convinced Bayard not to reveal his discovery of the direct positive printing process. Daguerre was then able to present his findings to the public first, thereby gaining the prestige and fame that went along with that designation. Bayard created the first staged photograph entitled, Self Portrait as a Drowned Man. In this image, he pretends to have committed suicide, presumably protesting being written out of the history of photography by political machinations. Bayard wrote on the back of his most notable photograph:

The corpse which you see here is that of M. Bayard, inventor of the
process that has just been shown to you. As far as I know this indefatigable
experimenter has been occupied for about three years with his discovery.
The Government which has been only too generous to Monsieur Daguerre, has said
it can do nothing for Monsieur Bayard, and the poor wretch has drowned himself.
Oh the vagaries of human life....! ... He has been at the morgue for several
days, and no-one has recognized or claimed him. Ladies and gentlemen, you'd
better pass along for fear of offending your sense of smell, for as you can
observe, the face and hands of the gentleman are beginning to decay. 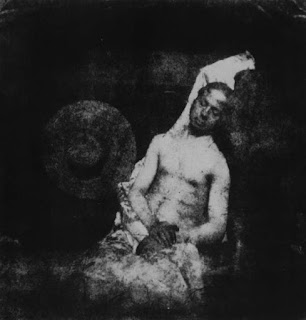 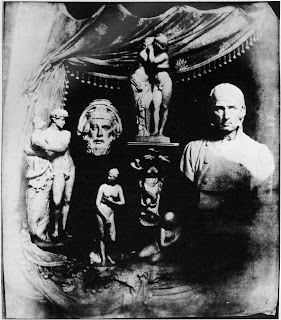 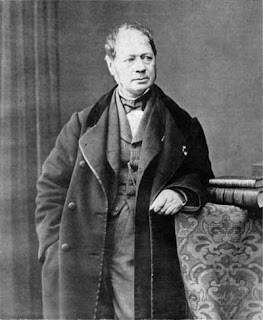 Posted by A Sound Awareness at 2:13 PM