A Symbolic Composition Of The Spiritual World

Augustin Lesage was born in 1876 and spent his early adult life as a coal miner. In 1911, when he was thirty five, he heard a voice from the spirit world. It said “Un jour, tu seras peintre” which roughly translates as "one day, you will be a painter". The voices instructed him on every detail of his work, from the mixing of the colour to which brushes and size of canvas to use.
For the next several years, he worked in the coal mine by day and painted by night, letting the spirits guide his hand. His paintings were created in a highly repetitive and methodical manner, as he began in the upper right corner of the canvas and gradually worked across and the downwards until complete.  As the canvas was built around a roller frame, Lesage could not view the entire composition until the painting was finished. His legacy remains obscure despite leaving over 800 large scale paintings, as his work is seldom exhibited outside of France. 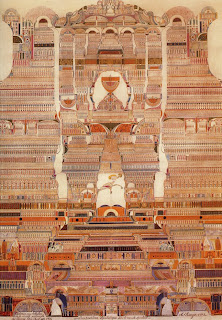 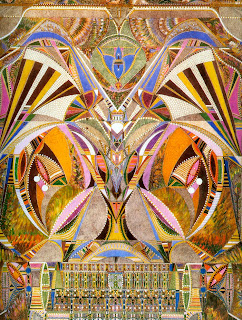 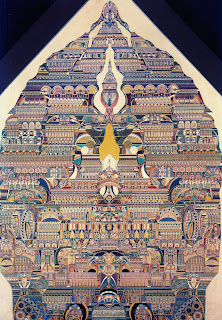 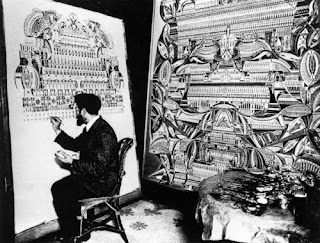 Timely post! I just visited the Collection de L'Art Brut in Lausanne, yesterday. Hope to post a few things when I get back home.

There were some beautiful Lesage originals at the Museum of Everything in London recently, though I think it's closed now...