I'd only seen one reproduction of a painting by Alfred Wallis before we went on our trip to Cornwall and to tell the truth I was struck dumbfounded when I saw them in the flesh. His paintings are intensely honest, powerful and spirited in their execution. I fell in love with them immediately. Alfred Wallis spent most of his working life as a fisherman. He claimed to have gone to sea aged nine and was involved in deep-sea fishing, sometimes sailing as far as Newfoundland in Canada. In 1890 he moved to St Ives in Cornwall, where he became a marine scrap merchant. He began painting at the age of seventy “for company” after the death of his wife. Wallis sold few of his paintings during his lifetime and lived in poverty until he died in the Madron Workhouse in Penzance. He was buried in Barnoon cemetery, overlooking St. Ives' Porthmeor beach and the Tate St Ives gallery. An elaborate gravestone, depicting a tiny mariner at the foot of a huge lighthouse – a popular motif in Wallis' paintings – was made from tiles by the potter Bernard Leach and now covers Wallis' tomb.  Jonny Trunk emailed me this morning with an odd bit of Wallis trivia, apparently Richard Attenborough sold a pair of Alfred Wallis paintings a few months ago.  So there you go.  Here's a few examples of his work.  I hope you like them as much as I do. 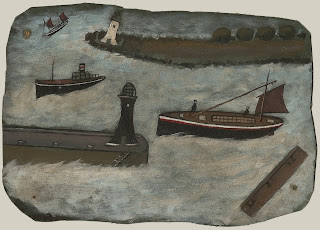 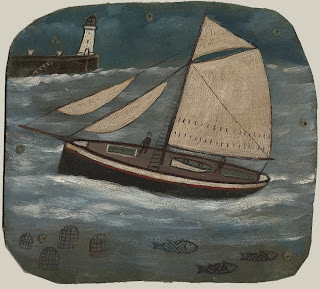 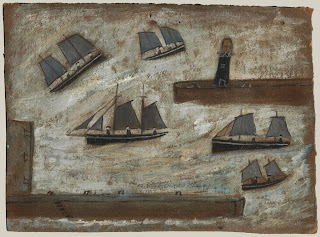 Posted by A Sound Awareness at 3:21 AM